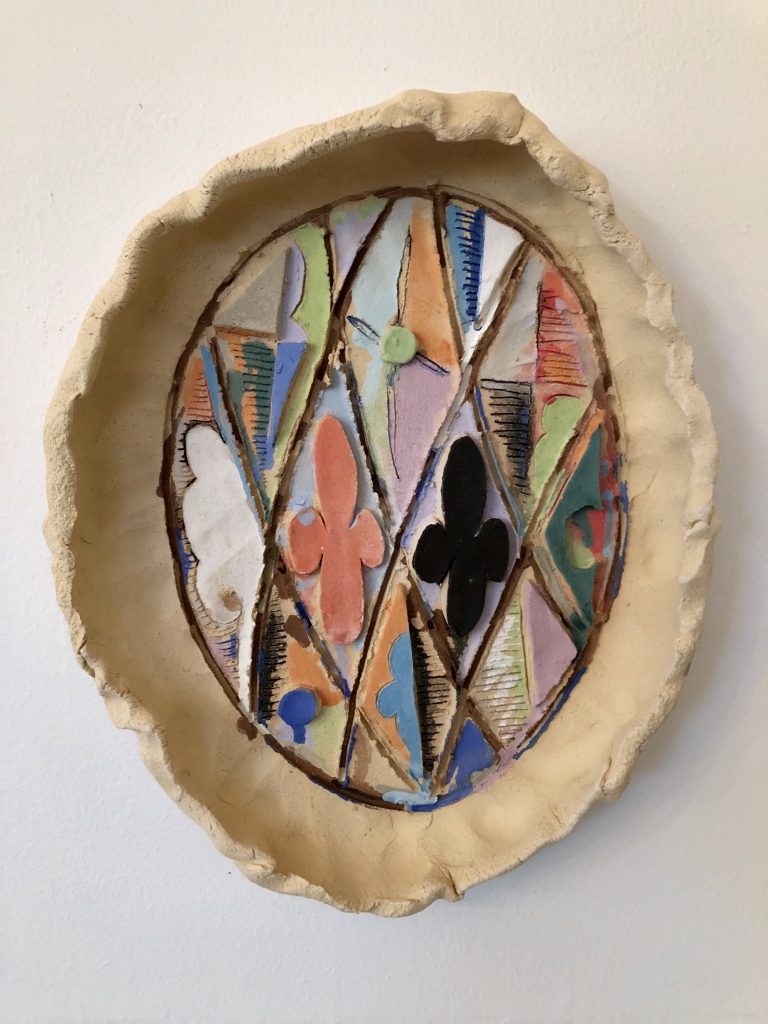 An exhibition featuring the ceramic work and transparency paintings of Tacoma Washington based artist Nicholas Nyland will be on display in Hartmann Center Gallery October 15 – November 20.  Join us for an artist reception and Visual Voices Lecture with Nyland on October 18th.

From the Artist: “The transparency paintings are digital images that were created by shooting through painted acetate. The technique is based on matte painting, employed by movie studios to augment scenery that was otherwise impossible to create on set. In this case, the “illusion” is of brushstrokes floating in space, playing with notions of illusionist space and abstraction in painting. The ceramic work uses traditional functional forms that “function” more as paintings with references to stained glass motifs and modernist abstractions. The cross-cutting concern is negotiating how an artwork functions as both an object and an image and the tension that can result when the two don’t match our assumptions.”

Learn more about the artist online at: www.nicholasnyland.net 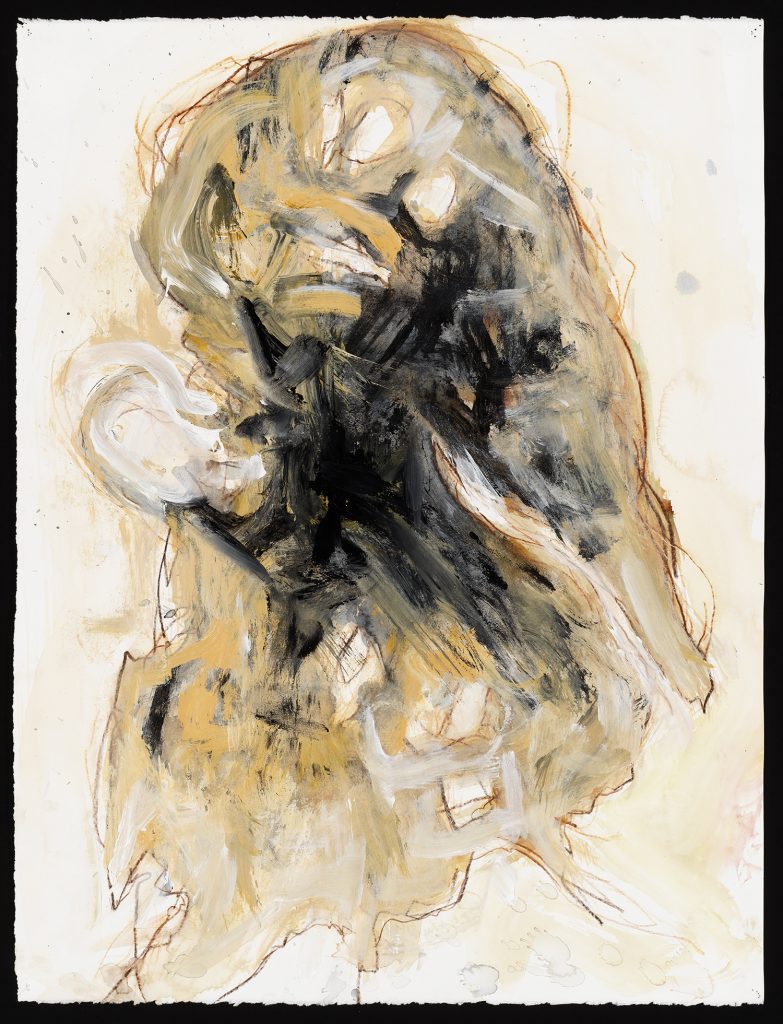 An exhibition featuring the large scale paintings and drawings of Chicago artist Michael K. Paxton will be on display September 28 – November 6, 2018 in Heuser Art Gallery.   Join us for the opening reception and a screening of the film Work at Hand on September 28th.

From the Artist:
As a sixth generation West Virginian I have seen my family, my culture and the very mountains of my home blown up, scraped off, discarded, flooded, poisoned, crushed in mine falls, choked with dust, riddled with cancer and derided as fools too stupid to know any better. Deciding how to give voice to, as well as come to terms with this my legacy from deepest Appalachia has been at my work’s core and fueled a career that now spans over forty-years. The plight of my family and friends in this third world resource colony of the besieged coalfields is a subject not heard from often in contemporary art and my role as a native is to point there.
Pushing hard against expectations with both knowledge and obsession, an otherness surrounds my work by constantly looking for the exact point where my bone deep Appalachian heritage smashes up against the academics of contemporary art.

Learn more about the artist online at: www.michaelkpaxton.com

This event was made possible through the support of Columbia College and the Illinois Arts Council Agency. 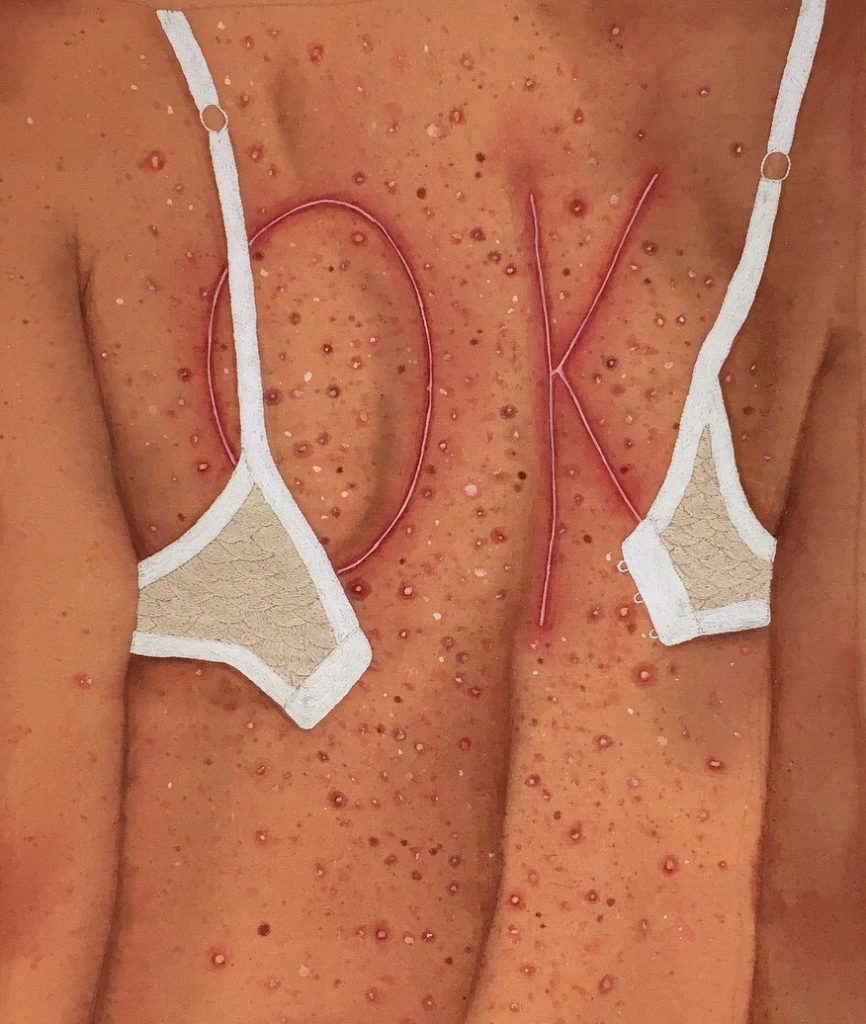 These three women artists connect the idea of “women’s work” and empowerment through their images, their concepts and their use of fabric and embroidery. Each brings a unique voice in exploring the ideas of body, identity and personal stories, utilizing a medium with a rich history of women’s craft. Stitching is slow and methodical, and invites the audience to also slow down to look carefully at the physicality of the thread and resulting marks that define, enhance and build the imagery. 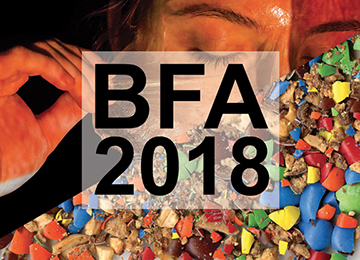 An exhibition featuring the artwork of two Bachelor of Fine Arts seniors will be on display at Prairie Center of the Arts April 30th – May 4th.  A reception will be held on May 4th from 6-8pm. 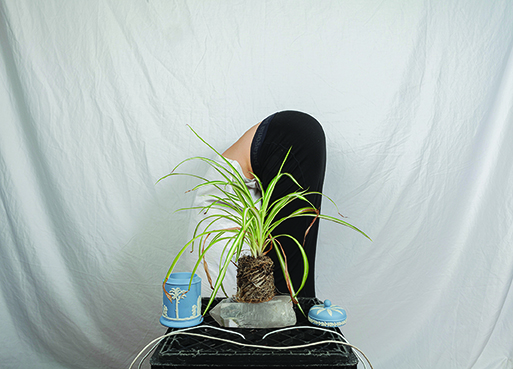 A reception and performative exploration for Adjunct Professor Whit Forrester’s exhibition The Vibratory Sympathetic Principle will take place April 12th from 6-7:30pm.  This exhibition will be on display in the Heuser Art Center 2nd Floor Catwalk Gallery March 26 – April 20.

Learn more about the artist at: www.whitforrester.com 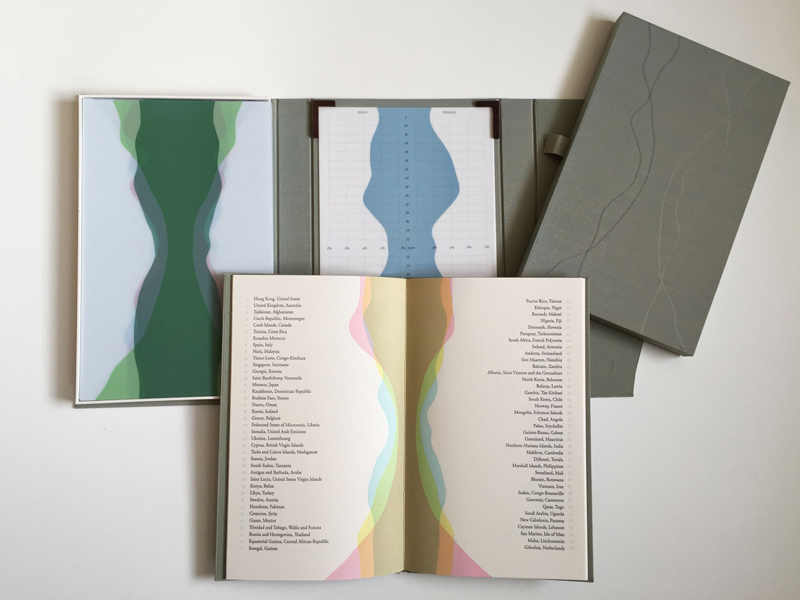 This lecture will focus on two books: a recent project about data mapping and a new book currently underway, loosely about ethics and urban planning.  Learn more about the artist and her work at: www.bigjumppress.com

This exhibition is the sixth installment of the biennial juried exhibition of ceramic artwork, Central Time Ceramics. The show brings together ceramic artwork from across the Central Time Zone to a city not only centrally located but also commonly associated with the central United States: Peoria, Illinois. Assembled in Peoria at the Bradley University Galleries are 50 ceramic works by 22 artists living and working in the Central Time Zone. From Minnesota to Texas, the locales represented are as varied as each artist’s aesthetic, yet the level of craftsmanship and innovation remains high throughout.

“Central” often refers to being in the middle, inferring sameness or mediocrity, yet the multiplicity of styles, methods and materials in this exhibition is anything but. This year’s juror is Gail Kendall. Following her formal education at the University of Michigan (BSD) and Eastern Michigan University (MFA) Gail Kendall spent ten years working as an independent studio artist in St. Paul, Minnesota. In 1987 she accepted a position in the Department of Art & Art History at the University of Nebraska-Lincoln where she taught for twenty-four years.

Kendall has superbly selected a diverse group of work full of color, technical expertise, and experimentation. This exhibition may be centrally located yet it depicts the Central Time Zone as a multifarious region including diverse perspectives on the materials, methods, and styles of contemporary ceramic art. 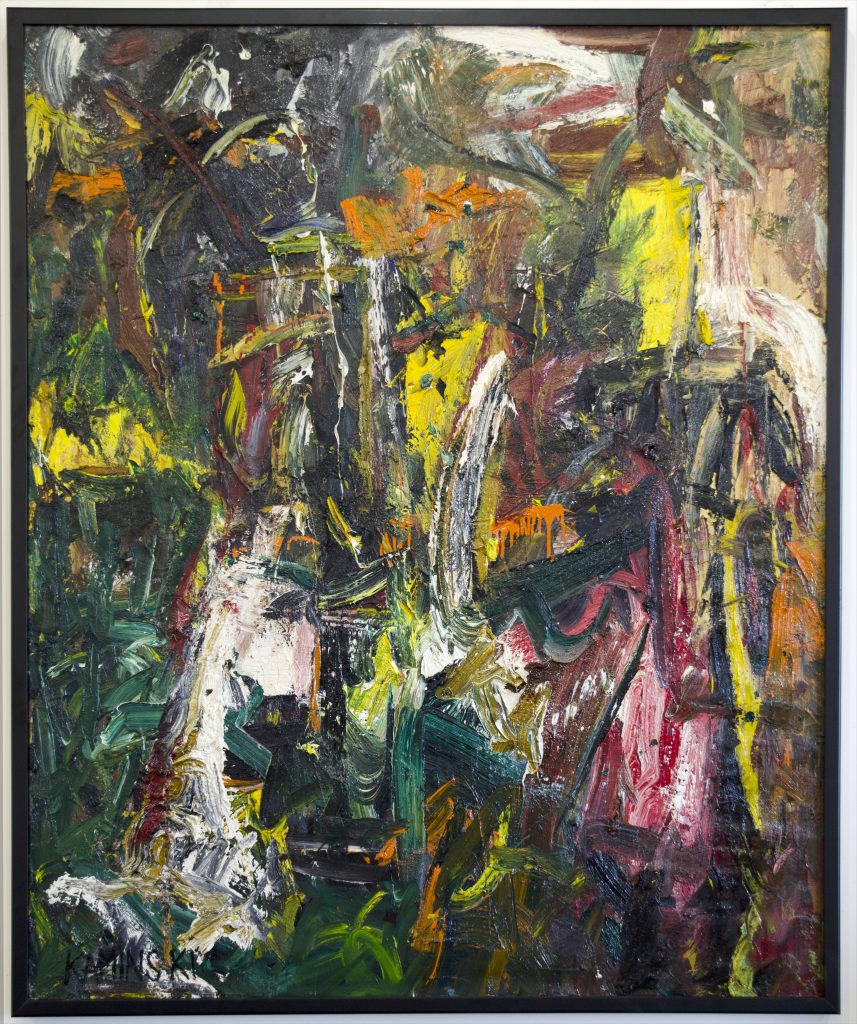 Kenneth Kaminski has created a series of paintings, primarily over the past decade, that evokes the attack on the World Trade Center in New York on September 11, 2001. His work reflects both the emotional reverberations and the role of religion and ideology as sources of tensions and conflict.

Kaminski was born in Chicago in 1961. He was interested in art making as a child and with his family regularly visited the Art Institute of Chicago. He went on to study painting at Bradley University in Peoria, IL where he received his BFA in 1984. While at Bradley, Kaminski was encouraged to paint on a large scale and became interested in the work of the Abstract Expressionists. His involvement with these painters, including de Kooning, Klein, and Pollock deepened during his graduate study at the Parson’s School of Design – Otis Art Institute in Los Angeles, where he received his MFA in 1986.

While at Otis, Kaminski was influenced by Emerson Woefler, an Abstract Expressionist, who was on the faculty. He also developed an affinity for a range of artists including Robert Rauchenberg, for his use of found objects in his paintings, and Mark di Suvero, for his constructed sculptural forms. In the late 1980s, Kaminski made a seminal piece, Inside/Out, which featured wood forms projecting from a gesturally painted panel. In Los Angeles, Kaminski began showing his paintings, which featured vigorous paint handling and bold color.

In 1990, Kaminski and his wife moved to New York, wanting to be involved with the art scene there. While working in graphic design, he produced paintings and showed them in galleries in New York. His exhibition “New York Windows” featured paintings with actual windowpanes which held photographs of city buildings, surrounded by gestural evocations of architecture. A key painting from the time was Sons of Liberty, which used collaged images of gravestones from the Revolutionary War period, along with painted geometric forms.

In response to the Gulf War of 1991, Kaminski paintings reflected on the role of oil and culture in the conflict, employing architectural and geometric forms. These works anticipate the artist’s impassioned response to the event of 9/11, an outpouring of work that went on for more than ten years. A central work is Man’s Religions, a painting that questions how religion shapes ideological conflict. Other works touch on spirituality and human suffering, in direct depictions of the attack on the Twin Towers and in more abstract works. In recent paintings, the artist uses his graphic design sensibility to starkly represent a sense of risk and the opposition of worldviews. Other new paintings show a shift to recovery and remembrance.

Kaminski’s paintings have been shown and collected globally.

This program was made possible through the support of the Illinois Arts Council Agency and Bradley’s Intellectual and Cultural Activities Committee. 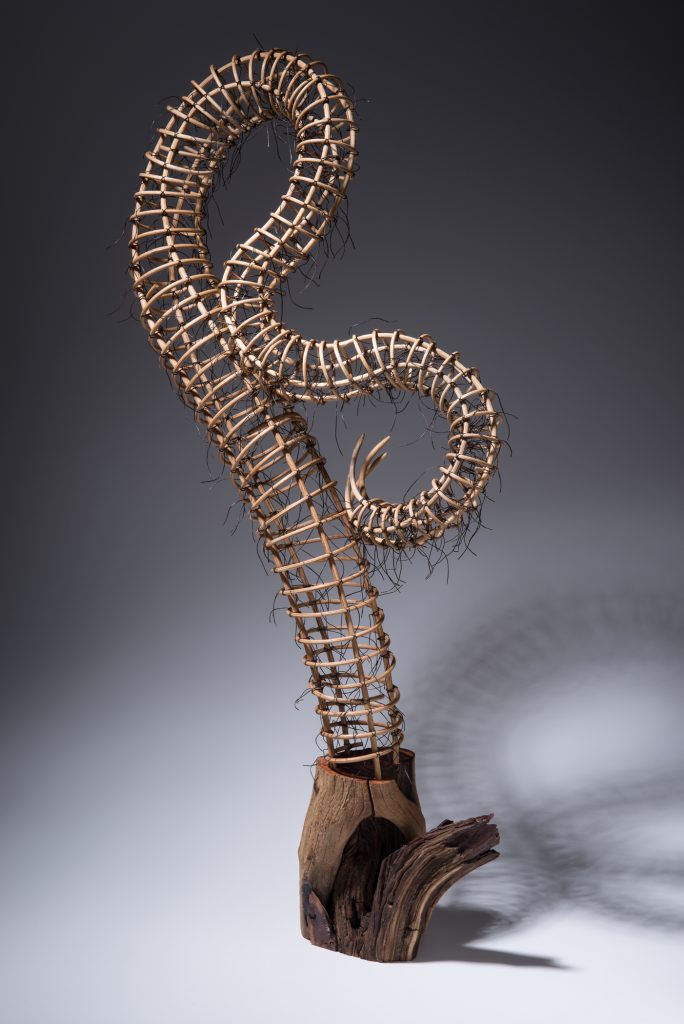 An exhibition featuring sculpture by artist Donna Hapac will be on display in Hartmann Center Gallery December 4th through January 3rd. Hapac is a sculptor who builds her forms from repeating elements.  She has worked in reed, acrylic fingernails, and wood. A reception will be held December 9th from 5:00-6:30 pm in the gallery.

Statement from the Artist:
My sculptures evoke the forms of animals and plants to inspire appreciation for our natural environment.

My approach to sculpture is additive.  I build my forms from repeated elements and this is true for all of the work in the show, regardless of medium.

The sculpture in this exhibition is drawn from three distinct bodies of work, based on their primary materials: reed, acrylic fingernails, or wood.

About thirty years ago, I made a shift from painting and drawing to sculpture.  I was inspired by both traditional crafts and contemporary fiber sculpture to explore new creative territory for me.  Using my own invented techniques, I began to create open forms that are containers of space, constructed primarily with reed and waxed linen thread.    I continued this approach, learning by doing and refining my techniques for some time.

In the early 2000’s, I took a detour and constructed my forms using acrylic fingernails, still using the linen thread and painting them with nail enamel.  These pieces were softer forms and less open, with a creepy edge to them.  After five years, I came back to the reed constructions with fresh ideas.

By 2015, I was studying woodworking to see how I could better use wood in my constructions.  Soon, I began making sculptures solely of wood, where my work is today.

Learn more about the artist at: http://www.donnahapac.com 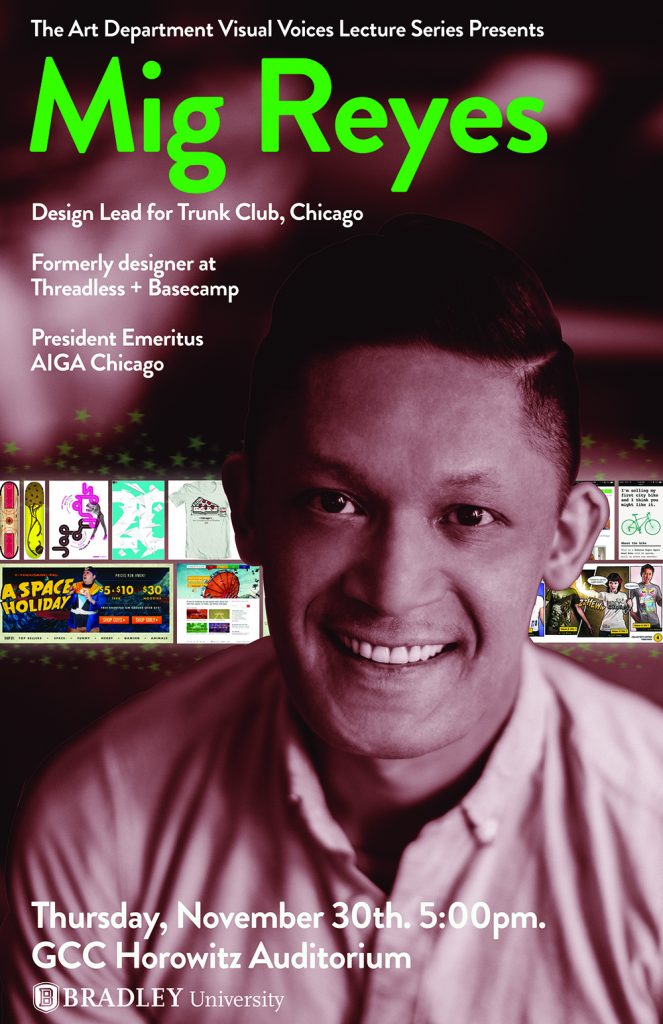 “I’m a staunch believer that designers-especially web and product-should have a deep understanding of the development process, being open to coding themselves. Regardless of role, I’m an even firmer believer that everyone should practice the craft of writing. From engineer, to product manager, to designer, to marketer, writing is a vehicle that unites all disciplines. In that same vein, I’ve learned through the various leadership roles I’ve held in design that leadership itself is a craft one practices.” – Mig Reyes