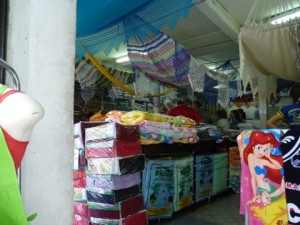 First full day in Manaus started with a great breakfast in the hotel including some very good coffee (everything is fine after morning coffee!) The team found a quite courtyard spot to hold their devotions’ which gave me the perfect opportunity to sit and reflect for these posts.

After loading up with my daily necessities of bug sprays, money, shades, cell (habit because the hotel is about the only place I can actually get a wifi reception), we met up in the lobby and headed into town. As we weaved through the tapestry of old colonial architecture and street stalls, several supplies were needed. First stop was to choose/buy our hammocks for the boat journey. Beautiful colors, great choices. About $20 each.

Next up was a kids store to pick up a load of underwear (for the orphanage? I’m not too sure), then the last stop was for my favorites – candy and soccer balls. Now you’d think that would have all taken about an hour tops, but this is Brazil and everything moves slowly so in the end it actually took us until lunchtime, when we had a nice buffet style meal. I have to say, that as someone who rarely drinks soda back home, I’m downing Cokes like they’re going out of fashion out here! 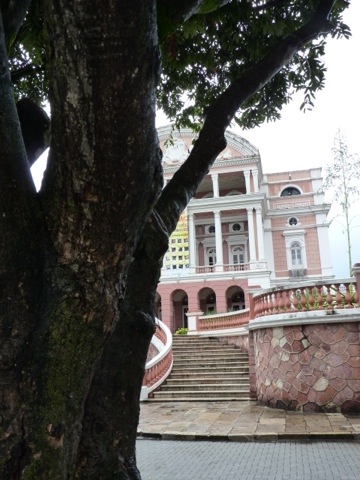 While we were eating, the daily storm started to throw down rain only this time it didn’t pass over. We waited for a lull and headed back to the hotel, trying to avoid the huge puddles and overflowing gutters above. Some of the group had umbrellas, others raincoats or ponchos. I have brought one with me but in my infinite wisdom left it in the hotel room. It didn’t really matter though because the heat quickly dried my clothes anyway.

We switched plans slightly because of the rain and headed to the stunningly beautiful Amazon Theatre (Opera House) for a tour. Perfect for a rainy day. The history of Menaus is really interesting. It really rose to prominence when the Portugese ruled and the worlds rubber industry centered around the area. Due to its affluence at the time,the theatre was prefabricated in Europe, shipped over and assembled in Manaus. Italian chandeliers alongside Wrough iron from Scotland and England. A really beautiful building, so out of place in the middle of the city. Great to see how much renovation is going into keeping it looking so good. *Manaus is one of the cities hosting World Cup games in 2014. So the place in general is undergoing quite a bit of ‘sprucing up’.

Back to the hotel to chill and a good opportunity for me to wash some clothes while taking a shower at the same time 😉 Then the group was back out for dinner via a minivan drive that would rival the best ride at Six Flags. 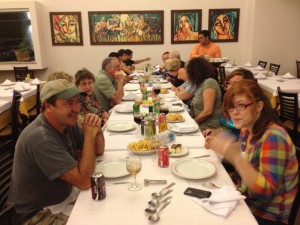 So over all, a really fun day. Unfortunately, something didn’t quite agree with me and I woke up in the early hours with a bad stomach ache which kept me awake most of the night from then on. To be expected really and nothing that didn’t stop me getting my morning coffee today 🙂