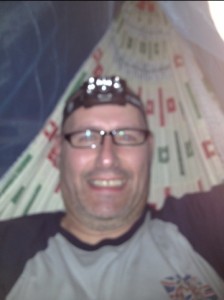 I think that maybe the hype about how comfortable sleeping in a hammock is could be a little exaggerated? Certainly my 6’1″, 210lbs found it a little difficult to find that elusive position. Never the less, I did get enough sleep to feel refreshed for day two on the river, plus the cold shower (I can brush my teeth, shower and go to the toilet all at the same time in this boats bathroom 😉 cleared any lingering cobwebs from my head (mentally and physically – lots of spiders on the boat!). When I did wake up through the night it was also because a sound from the riverbank over the engine noise, or the illumination of an isolated village woke me.

Breakfast, including an all important coffee, was excellent, as have all the meals on the boat. My biggest treat was a bowl of Tapioca! Haven’t had it since I was a kid back in England but apparently it’s pretty big here in Brazil. Also, they use a plant called Manioca in and on their food here a lot. It’s actually highly poisonous to start off but all the poison is extracted and then the rest of the plant can be used safely – in this case as a sprinkle on food such as rice, potatoes etc. Then devotion time for the rest of the team before getting ready for the days adventure.

We pulled in to a relatively large port and turned off the engines. We were picking up a guide to take us the rest of the journey as we were going down an unfamiliar tributary for the boats crew. He was the Deacon of the village (a position below the pastor I believe), and his name was Mikey, although it wasn’t spelt that way. Unfortunately we also had to pull down the rain tarps as a big storm was heading our way. As it happened, we just caught the edge of it. It turned out that this was in fact the main town of Maues, about four or so hours away from our destination. The total journey was about 600+ kilometers to the village, so we made really good time by traveling through the night instead of stopping (but risky, because of the amount of floating foliage, logs, tree stumps… Anacondas!). As we were ahead of time we got chance to briefly jump ashore and explore the town before continuing the river journey. Before we left port a large ‘bus of the river’ pulled up next to our boat and a crowd of passengers disembarked and boarded in what seemed like orderly chaos! The best part was watching the crew reverse a lone car from the boat, onto two scarily thin planks of wood onto the dock. It was made even harder by the drivers apparent inability to find reverse gear. Amazingly, they managed to offload the car and away it drove into town. 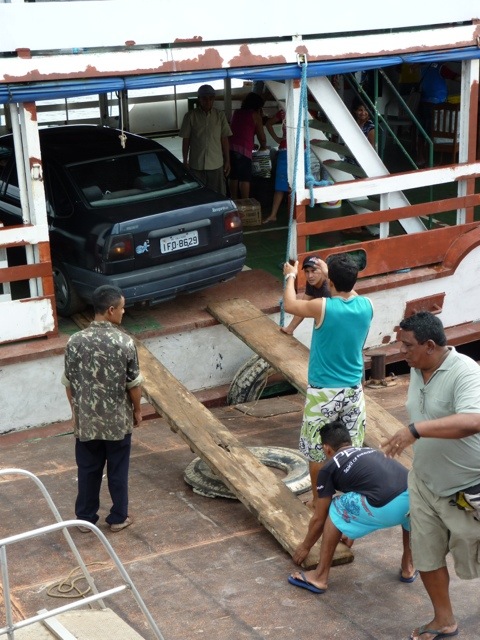 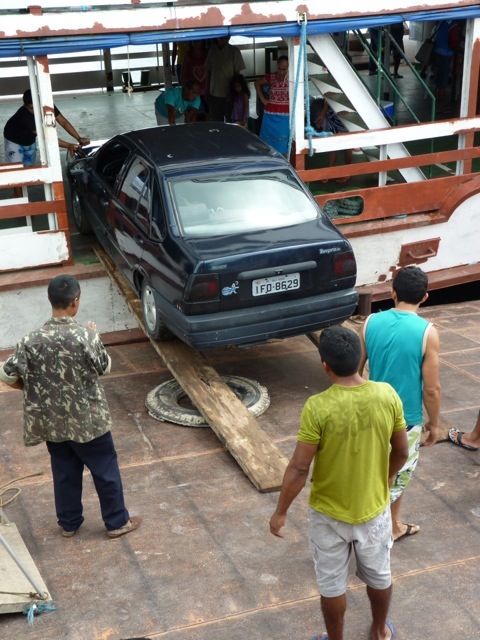 And so, off we went again, further and further down the Amazon. Still heading east, I think? As the hours went by, the landscape featured less and less civilization, and the rain forest appeared to to get thicker, larger, wilder. Every so often a few huts or assorted buildings would appear amongst the forest, often, the larger ones had a church in the center of the community. Most of the team took an afternoon siesta, but I have real trouble trying to sleep in the daytime, so I read the book accompanying me on this trip – “Searching for the City of Z”, an excellent read about the legendary British explorer Percy Fawcett, who’s life was consumed with the search on the Amazon for the city of El Dorado. Thank you Haydn for a great book. I owe you another one because I gave it to one of the wonderful mission organizers, Laurie, who is based out here in the Brazilian Amazon. 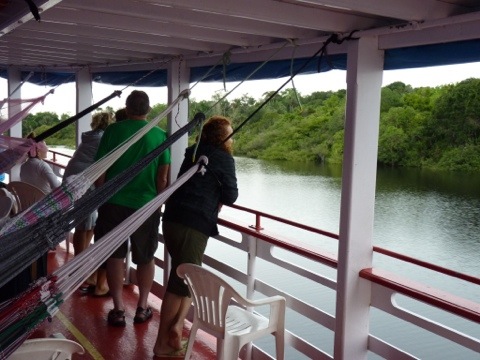 We pulled the tarps down as a pretty bad storm headed our way. When it did hit, the wind and rain was pretty intense for about an hour before the worst of the storm had passed. Finally, our boat started to swing off as we reached a bend in the river. Ahead we could see a small community of huts, and building on both sides of the river. As we neared the left bank we could see a group of young boys playing and swimming in the river, despite the fact it was still raining pretty hard. A little girl stared at us in a lone houseboat moored alongside our much larger vessel, which turned out to be the Pastors home. The rain had not really let up and was actually getting heavier as the light of the day was also starting to fade. The team descended the gangplank which was at a precarious steep angle down to the muddy bank. One by one we negotiated the slippery walkway followed by an equally treacherous path up to the village center. Almost immediately we were face to face with some of the villagers – The reservation missionary, Ruben, greeted us enthusiastically in a mix of Portuguese and Spanish, and then we stopped briefly to talk through our translators to a young mother and her seriously cute little kids. We were also introduced to the village school teacher, Kristian. She said that they don’t have malaria in the village and the Mosquitos only come out when it gets much hotter – good to know. Unfortunately, they do have ‘chiggers’ lurking in the grass, these things latch onto your skin then leave a toxin which makes you itch so bad for days that you wish you’d been bitten by fire ants instead! Apparently they get under any tight clothing, like socks, so maybe I should go ‘native’ for the rest if the trip 😉 Other creatures to be on the look out for ranged from monkeys and sloth, to the more dangerous jaguar, anaconda, kaman and of course the wonderful piranha. 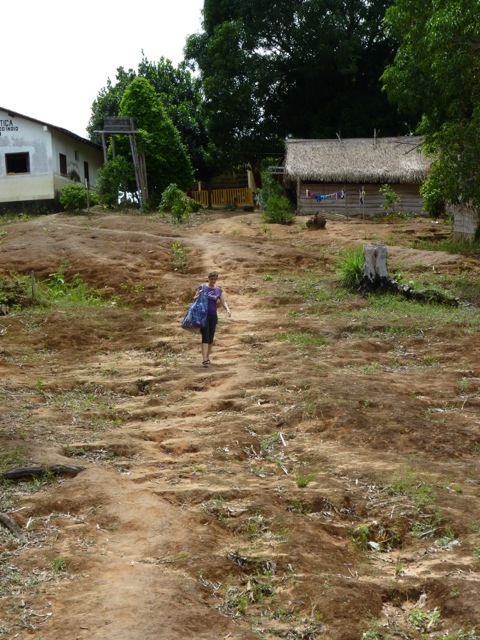 We headed up to the new church construction site where we had chance to see the task ahead. The guys from the village had the main supporting posts up but nothing else, so not sure how much we will be to do in the short time we’re in the village, but hopefully every extra pair of hands will help. Everyone stood there in the rain, greeting, shaking hands, chatting, looking around… getting wetter, and then we turned around and headed back down the muddy path back to the boat. It was dark and nothing else could really be accomplished in the village for this day. Once back on the boat, the team layed out the plans for day three. 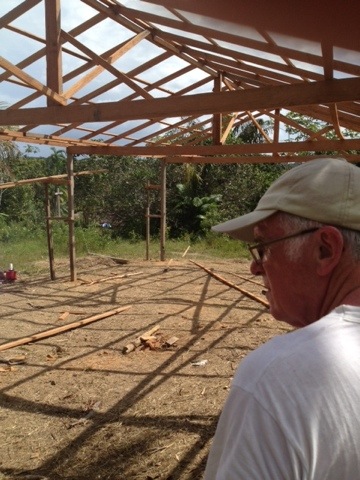 The night ended with us sitting out on the deck with the noises of the amazon rainforest all around us and a ridiculous amount of stars overhead – watching a movie on a laptop…. Anaconda. I kid you not!