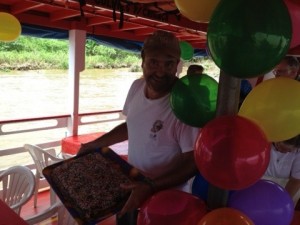 Because the boat was moving all through the night, as with the outward bound journey, I couldn’t hear Mark ‘the Olympic gold medalist for snoring’ for the constant hum of the engine, consequently, a good nights sleep! It appears that however noisy – a constant noise works a treat. I woke around 5:30am and after a quick wash grabbed a coffee and sat and relaxed on the deck, watching the rainforest go by. As we were fighting a very strong current, it made sense to hug the riverbank rather than going in the center where it was strongest. This meant that we were almost touching the scenery on left and later right hand side of the boat. After breakfast the day became one of spotting animals and birds waving at the gradually increasing population and generally grabbing some sun. 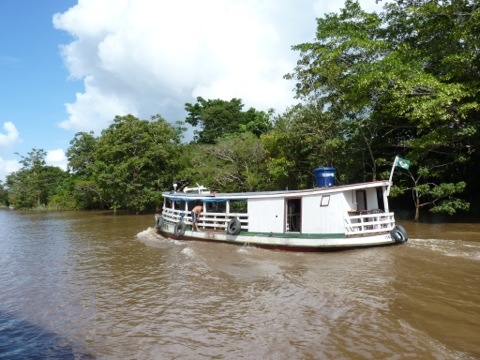 We pulled into a busy little town called ‘Itacoatiara’ where the cook needed one or two supplies. This gave us an hour to have a quick wander along the main street, grab some sodas, and take in the small market before heading back to the boat and pulling out again. Within a short while lunch was ready, however it had an extra element – a huge birthday cake for Randy who’s birthday it was today. After the Portugese version of ‘Happy Birthday’ we sat down to another great meal from our cook including a wonderful local fish called ‘Tambaqui’, followed by the ever present fresh fruit and of course – cake. *Most desserts in Brazil seem to include condensed milk. If you know me well you will also know I could eat condensed milk by the can – so I’m in heaven here! 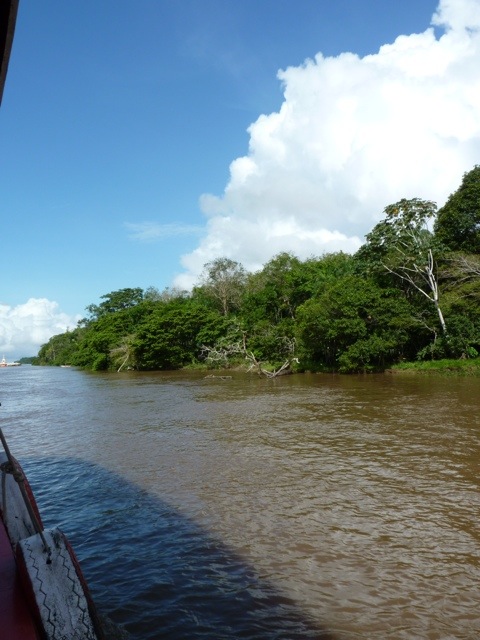 The afternoon continued as the morning did. Sitting on the open deck, catching the sun (a little too much!) and taking in the amazing scenery and trying to spot animals (Toucans, Macaws, Spider monkeys etc.). It was like being at a really big IMAX theater! This ‘tiring’ activity was only broken by coffee, tootsie rolls and popcorn.

Evening came and with the darkness falling fast we took out flashlights and shone them at the nearby flooded banks of the river (rainy season for another three months or so. The river is already flooding a lot of land and is going to rise a considerable amount more before the season is through). We were looking for the red reflection from the eyes of Kaman and sure enough it didn’t take long before we spotted one pair of eyes, then another, and another. One was side on and the flashlight made out its whole body shape! We may get another chance to night spot them, depending when we pull into January Lake tonight, but if I’m already asleep in my hammock then the only croc I’ll see will be in my dreams – the one in Peter Pan….Tick tock, tick tock!

We are going to take a small diversion before Manaus – a place called ‘January Lake’, about two hours from the city. I think we get there close to midnight so will just stay on the boat until tomorrow morning (Saturday) then after breakfast go to the place itself. I’ll write about it in tomorrow’s post as I don’t know much about it other than I think we’ll see some wildlife and I can go ‘medieval’ in the gift store! 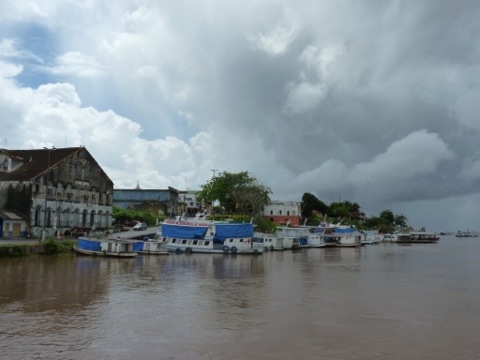 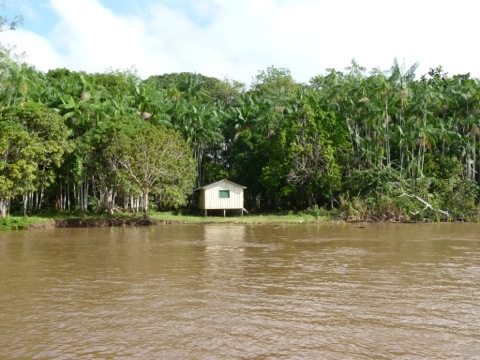