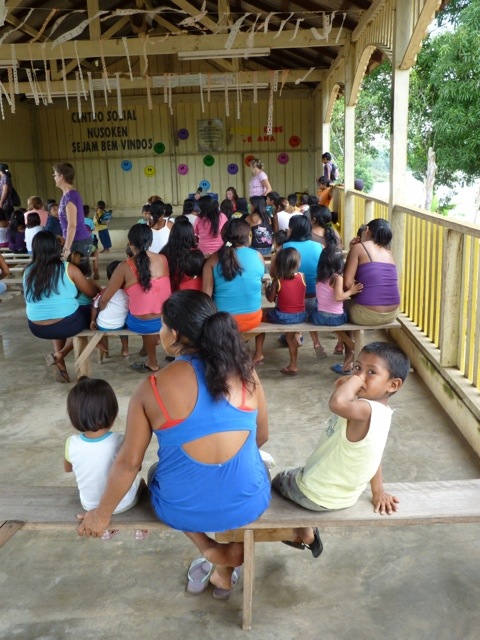 So, our last day at the Vila Nova. Despite the discomforts, the visit to these wonderful people has been far too short. After the morning routine we split up so that the majority of the team went to the village center to give some more classes and play more games, while the rest headed to the church construction site. I took my camera and went with the latter in the smaller boat with the intention of walking through the village later to the main group, photographing the scenery as I wandered around.

As we approached the construction all the workers were sitting around, the roof was all up and the guys from the US were late for work… as usual! We weren’t a complete waste of time though because we had brought a big pot of pasta, juice and granola bars – gratefully accepted by all. It looked like the building had come to a standstill. They cut and finished all the wood for the building straight from the rainforest (not Lowes!) and so far hadn’t got around to the flooring. So other than raking the earth and bringing up some pews from the existing church hut, ready for this afternoons dedication, there was nothing more we could do. Before I headed over to see what the rest of the team was up to back in the village hall I gave chief Joao my set of heavy duty work gloves (oh yes, I know who to side with, just in case?) 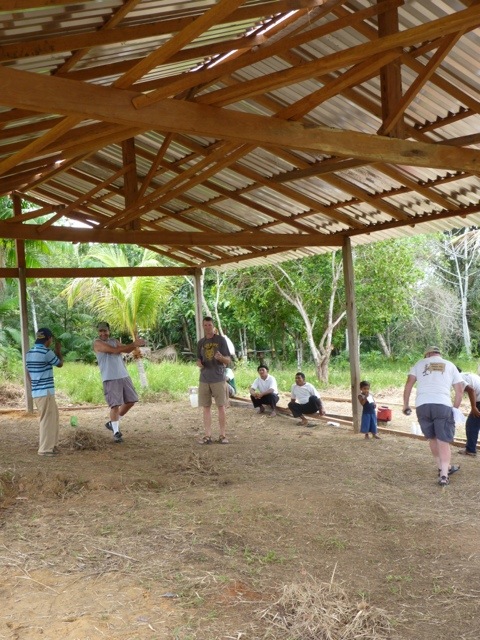 The village hall was a hive of activity. I was soon taking photographs of, yep, you guessed it, more adorable kids!. Eventually, ‘school’ was done and all the kids headed into the village ‘square’ (I use the term very generally because it was an area that looked more like the WW1 Somme than anything). What followed was a crazy half hour of frisbee throwing, juggling and, finally, the appearance of a soccer ball. I quickly started kicking the ball around as best as possible, given the playing surface, with two or three kids – probably not such a good idea given the humidity! Exit one sweaty Brit 🙂

We were on the clock now as Patrick was adamant the boat leaves at 3pm. But first we had to present the village pastor – Pastor Lailson – and his wife with everything from bibles, to a hammock. This particular pastor was in a particularly dire financial position, living on a boat with his family and building the new church, so the team made a financil donation to help him and his family. It was a very moving scene to see this extremely humble man accept his gifts.

Last thing for the day was also one of the most important – to dedicate the new church (even though it was far from finished). As we all headed up to the church, like the pied piper, the villagers followed behind. After some prayers of thanks in Portuguese and English and some touching singing from three of the village kids, followed by one of the men, the dedication ended with an intense laying of the hands between the mission team and the villages. Finally, one of the team, Mark, had brought his guitar for devotions, but it was also his intention to give it away to someone worthy of it at some stage of our visit. One of the three kids singing was a boy who borrowed Marks guitar to play (very well) during their song. This made him the obvious choice for the guitar gift and he accepted it with the face of someone who looked like they were about to pass out with overwhelming emotion! After lots of goodbyes, handshakes and hugs we headed back to the boat – but not before I gave my hunting knife to the chief (read earlier comment – knowing who to side with!) and my Spongebob bandana to one of the young mothers who had caught my attention from the first day because her little daughter had a cold and I think an earache/infection which left her miserable. It wont make her better but at least her mum can wear something on her head in style… Or maybe she’ll use it as a diaper. Whatever works? 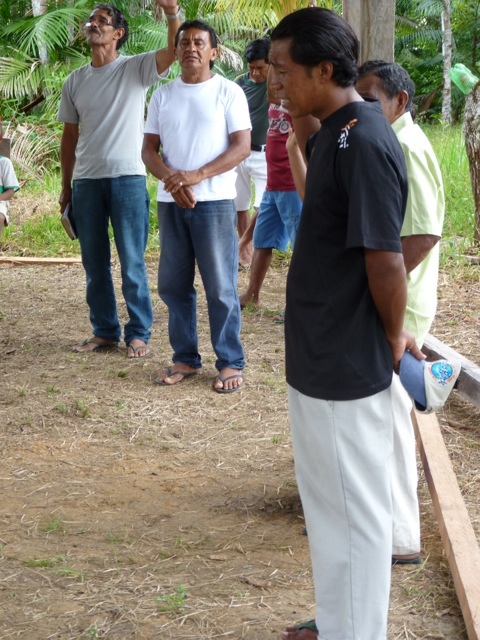 Back on the boat. More goodbyes and waving than the opening scenes from ‘Titanic’ (as long as the ending is different!) then it pulled out and headed west(‘ish), against the current. Numbers are vague, but it will take over 30 hours to return to Manaus, a wonderful hot shower, fresh clothes and wifi, however that remote village in the Amazon rainforest and its people, will always have a place in my heart now and should they ever fade from my memory and I stop looking at all the photographs I have taken, I only need to watch the movie “Anaconda”, however bad it may be, and I’ll remember how we watched it on a laptop, in the open air, as our boat ‘The Castelo Guedes IV’ was tied up alongside the Vila Nova – home of the ‘Satere Maue’ people.

We again had Mikey on board to guide us back to the main river route until we reached Meuse, where he jumped off the boat onto the dock, waved goodbye with the big smile always on his face and disappeared into the night. 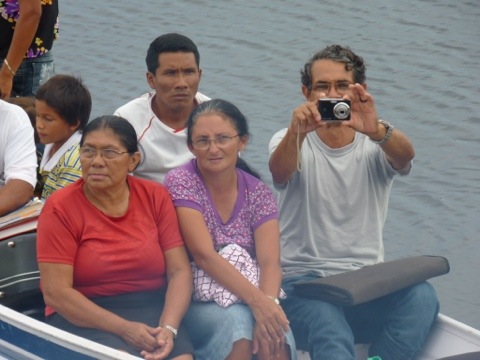