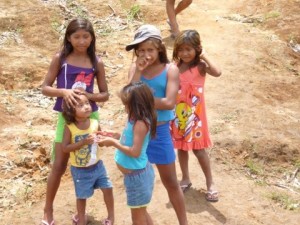 Same format as previous mornings. I think I actually got some sleep, probably because laboring out in that heat/humidity wiped me out. Up around 5:45-6:00am, breakfast, devotions. Today was going to be the busiest one for the mission team. They had so many things to do ranging from teaching to feeding the villages lunch. Then in the afternoon was a clothes bazar, where clothes were going to be issued as well as a variety of cloth bags filled with items specifically for mothers and adults, and coloring books, toy cars and candy for the kids.

We met the community at the health center again, which seems to be the main gathering place and, as with the previous day, it quickly filled up with kids, young mums and a few older ones. The team decorated the stage, gave out cookies and juice and began teaching classes. As I wandered around the children were a lot more bold than yesterday. I kept feeling a tug on my belt and when I’d look down there would be a dark haired, big eyed child grinning up at me. I would take their photograph and then let them see it in the camera – more giggles! 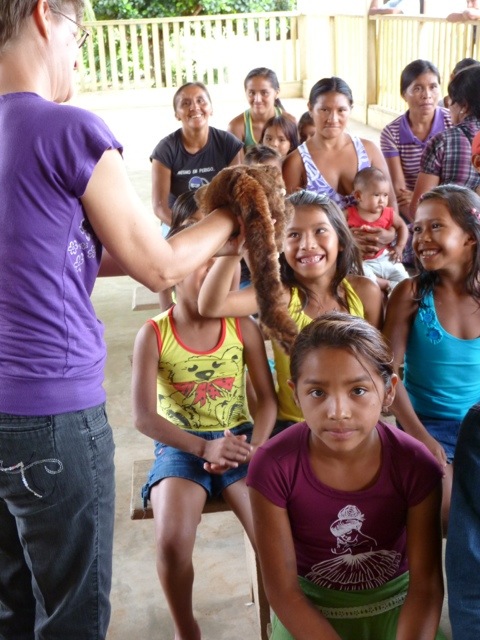 Eventually, after taking some really great images I retreated down the hill back to the boat, but not before I picked up a band of kids on my tail! I took their group photo, then one more of some vultures hanging around a little too close to our boat, then it was pretty much time for the rest of the group to also meet back at the boat for lunch.

After lunch and a quick rest we took a large chunk of the mission bags up to the village where they were going to have their clothes bazar. As we set everything else up the crowd gathered in anticipation. At this point one particular girl caught my attention with something she had wrapped around her leg – on closer attention I realized it was a small pet monkey, hanging on for dear life to the girl. It was an amazing sight, almost like an ‘accessory’! 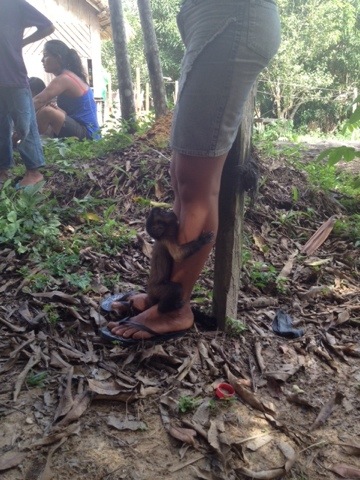 The bazar was turning a little into organized chaos so I left and headed up to the church construction to see what I could do to help. As it happened, it was perfect timing as the aluminum roofing sheets were almost ready to go up and Patrick and I were the guys with the gloves so we had the job of lifting the sheets up to the pastor and others perched precariously on the roof beams. We helped to work on the roof until one full side was completed. It was touch and go whether we had enough roofing or not, but it would appear that they will be fine.

Hot,, sweaty (another very humid, sunny day) and desperate for a beer (no beer on the boat!) we headed back to the boat, for a shower fresh clothes, another great meal then relax for the night. Last day at the village tomorrow. Some more mission donation work then a dedication to the unfinished church before we say goodbye to the people of Vila Nova and head back up the river towards Manaus. Its against the current all the way so will take even longer an the journey out here.