The first of the Spring season of productions for the Bradley University Theatre Department is the harrowing, but empowering ‘These Shining Lives’. A play written by Melanie Marnich. Based on the true story of four women who worked in a watch factory in Ottawa, Illinois, the play dramatizes the danger women faced in the workforce in the 1920s, and the lack of concern by companies for protecting the health of its employees.

Narrated by one of the workers, Catherine Donohue, These Shining Lives shows women getting a chance for a well-paying job in the 1920s and early 1930s, which was uncharacteristic for the time in the United States. The job, which seems easy enough to the four main characters, is painting the hour markings onto different sized watch dials using a radium compound which glows in the dark. Radium Dial, the company that hires the women to do the painting, tells them that there is no evidence that radium is harmful, and even has health benefits. After a few years, the workers notice that their hands start glowing in the dark, but assume that it is just from the radium powder that is used to paint the faces. The ladies develop ailments, including jaw infections and bone pain, but several local doctors tell them that all they need is aspirin, which of course does not help. After years of search, they find a doctor who is willing to put his name on the line and diagnose the women with radium poisoning. This in turn helps the four main characters decide to file a lawsuit against Radium Dial. An attorney, Leonard J. Grossman, agrees to take the case for free with Donohue as the lead plaintiff. They win, but Donohue succumbs to radium’s effects. The real Catherine Donohue died on July 27, 1938, shortly after testifying before the Illinois Industrial Commission.

As always, a challenging, but extremely enjoyable piece to work on. The visuals for the production needed to show the obvious elements of radium and time, but also emphasize the collaborative strength and empathy of the women characters involved.

Here are some initial ideas followed by the final poster piece… 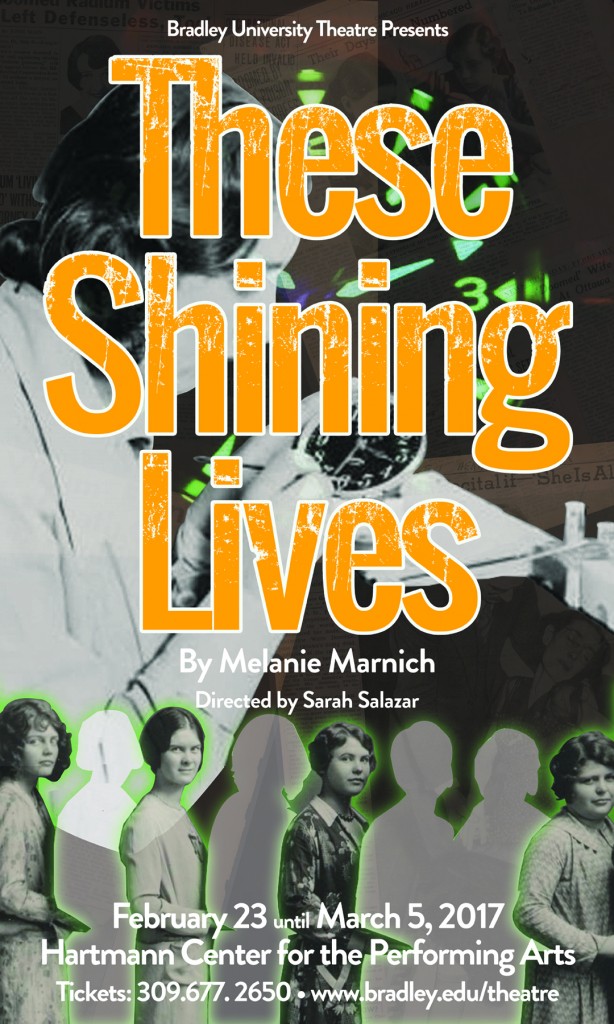